Alpha is one of the five members of the Dandy Alliance on TOME, of the Fighter class, with abilities based on Greek Mythology. He also obtained the Forbidden Power during Episode 1 which takes the form of a static field around him with the ability to speak. It seems to only talk to Alpha, and causes pain to other players in the real world. As of Episode 10, the Forbidden Power was removed from Alpha, only to be emerged with it back in Episode 15.

From Season 2 (Episode 11) onward, he's shown to be a lot more outgoing, confident and direct with people, likely having overcome the doubts he felt about himself after his dangerous encounter with Demon Zetto. Alpha demonstrates a more angry side as a result of his increased confidence, showing anger and frustration at things he can't get answers for or doesn't understand.

In Episode 10, Alpha is mentally harassed by the Forbidden Power as word of it spreads around, while other players attack him in an attempt to bring it out, but to no avail. Alpha recieves a message from Zetto telling him to meet at the tournament grounds so the Forbidden Power may be removed once and for all. At this point Zetto explains to Alpha how it is taking control over Alpha's naive mind, and that he needs to destroy it before it harms anyone else. The Forbidden Power takes over Alpha once again in an attempt to attack Zetto, but he grabs Alpha and attempts to drain it from him, only for it to destroy his robotic arm and transfer to him instead, turning him into a demonic incarnation of himself in a manner similar to Alpha. Alpha fights the newly awakened Demon Zetto in an intense battle, in which Flamegirl and Nylocke attempt to interfere (but cannot due to the battle grid being up between them), and tell Alpha to intentionally lose the match so the grid can disappear and allow them to help.

Alpha is slashed by Zetto, and as he is damaged enough for the battle to count as a loss for him, the grid fades. Before Zetto delivers the final blow, Nylocke hops into the arena and pierces the Demon Zetto in the stomach with his sword (Drain Edge equipped to it), effectively absorbing the Forbidden Power from Zetto, but dealing heavy damage to his body as a result.

Alpha is knocked unconscious as voices from the outside the game world are heard (presumably the voices of Alpha's classmates), who refer to him as Michael. The voices fade away as Flamegirl calls him by that name as well, waking him from his unconscious state of mind. Nylocke tosses the Drain Edge as far as possible, assuring everyone that this will be the last they see of the Forbidden Power. Alpha gazes off into the distance, then suggests they do a quest, relaxed now that their worries are gone.

Besides these attacks alone, Alpha is capable of putting up decent hand-to-hand combat; in Episode 10, Alpha is shown to exhibit enough strength to rival Demon Zetto in physical combat; while in Episode 11, he is capable of kicking Execk's swinging hammer back to his face as a finishing move, knocking him out in the process.

"Summons various elemental powers inspired by the Gods of Ancient Greece! New to the game, but holds a lot of promise and potential!" 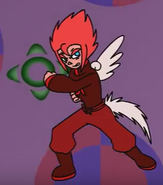 Retrieved from "https://tome.fandom.com/wiki/Alpha?oldid=9341"
Community content is available under CC-BY-SA unless otherwise noted.