"Look, you both need to get out of here and pretend you never saw this place, or I'm going to be in a lot of trouble with the Webmaster..." - Asterob

Asterob is a minor character in TOME who works as a programmer for Webmaster. He is of the Fighter class with the power of reflection.

Asterob first appears in Episode 2, Mansion Midnight, during which he is working on completing the Mansion for the Webmaster. Kirbopher and Nylocke encounter him in the Mansion while trailing Gamecrazed, who had entered the Mansion earlier. Asterob timidly demands that they leave, as the Mansion wasn't supposed to be accessed by any players yet. When Kirbopher and Nylocke refuse and start fighting, he reluctantly fights back using a shield that gradually stores up energy before releasing it in a powerful blast (which accidentally breaks a hole in one of the Mansion's walls). Before he could convince the two to leave, Splat invades the mansion and captures Nylocke and Kirbopher, demanding that Asterob hand over the beta weapons in his possession, which have capabilities similar to his shield. Gamecrazed, who had been hiding elsewhere in the Mansion, then attacks Splat and throws her from the Mansion, before using his abilities to fix the hole in the Mansion's wall. As thanks, Asterob gives him the Drain Edge. He then pleads for the players to leave the Mansion, which they do.

Asterob briefly appears in Episode 4, Fraggedquest, where he attempts to help Alpha and Gamecrazed find the feet of the Shadow Guard Idol.

The quarterfinal round in the Gemini tournament, against two unnamed fighters, is won single-handedly by Sniperwheel, leaving Asterob very upset about the loss of his shield. It is just at that instant that the shield is thrown back into the arena by Zetto, allowing him to participate in the upcoming semifinal round against Nylocke and Gamecrazed.

At the beginning of the round, Sniperwheel tells Asterob to "let a real man handle this one," which infuriates Asterob. He removes his hat, glasses, and tie, telling Nylocke that "there's only room for one Brit to be at the top!" However, he loses when the recoil from his shield's Drain Beam sends him off the edge of the tournament platform, defeating him instantly.

Asterob appears briefly during the credits sequence of Episode 9, standing atop a building in Mechcity in his new outfit.

Asterob again appears briefly at the beginning of Episode 13, standing atop the Mansion and looking worriedly at the dark clouds filling the sky.

Asterob comes across as being slightly nervous and wary of other players. He is especially afraid of disappointing the Webmaster, who hired him to program and design certain parts of TOME, such as the Mansion. Despite his nervous tendencies, he's rather nice and friendly towards people he knows he can trust.

He is of English origin, and makes this very clear by using phrases such as "bloody hell" or "crums" when annoyed or distressed.

Asterob appears in the Terrain of Magical Expertise RPG adaption, renamed as Asterologist, as a member of a guild known as "Cast O'Dreams", alongside Snowhyti, Saturndiva and Sniperyda. His appearance became less resembling to Lawrence Simpson with his hat removed and his glasses becoming vibrant shades as well as a brown jacket and gloves. He also has scientific and astral based powers. He also has a more calm and collected personality than his more cowardice personality from the predecessors. 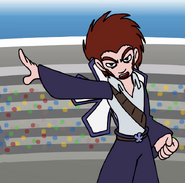 Asterob's new appearance.
Add a photo to this gallery

Retrieved from "https://tome.fandom.com/wiki/Asterob/Asterologist?oldid=8806"
Community content is available under CC-BY-SA unless otherwise noted.