Flamegirl, sometimes called "Flamey", is one of the five members of the Dandy Alliance in TOME, a Spellcaster with the power of fire. Unbeknownst to her, the antivirus program - or "Purple Flame" - to cure the Forbidden Power had been attached to her character model in Episode 3, which was the power source of the Dragon Bug. This made her the only person able to stop the Power's influence on Alpha, and later put her in risk of brain death when the Purple Flame was used by Rubirules to try and control SOFDTI.

Before the events of TOME, Flamegirl was partners with the user of Neomutant in programming at their high school. She got mad at the heavy amount of secrecy and thus left Neomutant behind.

Flamegirl first appears in episode 1 You Gotta Virus where she is talking to Gamecrazed and awaits the arrival of the rest of her friends. Alpha and Kirbopher finally arrive and they all begin to discuss plans on how they'll deal with the hackers who keep ravaging TOME.

Flamegirl is quite confident in both herself and others. She is quite powerful in battle, and capable of playing the game very well. She enjoys talking with her friends, whether it be the guys or girls, it doesn't seem to matter, as long as they are close to her.

She cares for all of them, but none more than Alpha. When the Forbidden Power took over his body and he transformed into a monster, she kept asking about him and trying to figure out what was wrong, more intently than the others.

"Driven and focused leader of the "Dandy Alliance" guild. Specializes in a wide variety of fire-based techniques, with very potent magical attack strength."

Flamegirl's design for the TOME RPG adaptation shows vibrant colors of orange with some similarities with her second season design. Her personality and voice remain the same. 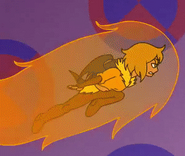 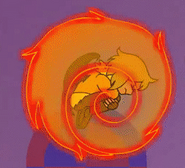 Retrieved from "https://tome.fandom.com/wiki/Flamegirl?oldid=9388"
Community content is available under CC-BY-SA unless otherwise noted.