Kajet, more commonly known as the Forbidden Power, is a strange entity that exists within the world of TOME. Alpha comes in contact with it after he loses a battle and finds a hidden door. When someone comes into contact with it, it gives them the power to harm players in real life. It was formed from a combination of the Shadow Guard Beast, the first planned boss for TOME, and the negative energy released from the entity that powers TOME, SOFDTI. As of Episode 15, Kajet is gone for good, having joined Alpha one last time, allowing him to come to terms with his inevitable death knowing he did not die powerless.

The Forbidden Power appears as a floating egg-shaped field made of waves of static that can change in size and shape, as long as it is still touching the host. It has the power to possess its host completely, turning their eyes red and shading them darker. When Alpha first finds it, it is wrapped in chains and sealed with a padlock. In season 2, the Forbidden Power's appearance is much more shaded on the edges, giving it a clearer egg-like shape.

Its true form is that of the Shadow Guard Beast, the first planned boss for TOME, and one Alpha and the crew had attempted to fight in Episode 4 before Rockoon hijacked it. The beast Alpha and the crew tried to fight is not the same entity as the Forbidden Power, as this is most likely a remade boss that was designed to replace the one that went corrupt. 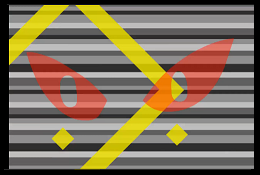 The Forbidden Power was created by a freak accident back in TOME's development stage. The Netkings were working on what was going to be the first boss of TOME, the Shadow Guard Beast. SOFTDI, the sentient AI living within TOME, had accumulated dark energy within herself from negative emotions and thoughts. Zetto, at the time a VR tester for the game, was there to fight the boss and test its capabilities. Upon its summoning, SOFTDI expels all of her negative energy, and this energy goes into the beast. It speaks to Zetto in a manner similar to the Power's current state, insulting him. Out of anger, Zetto jumps towards the beast but is unable to strike as it swings and chops his arm off. Zetto is unhooked from the game as he starts screaming in pain, apparently very hurt by the virtual assault. The Netkings attempt to seal it away, but it is only with the help of SOFTDI, who acts as a positive to balance out the beast's negative, that they actually lock it up completely and revert it to its larval state, resembling what we know now as the Forbidden Power.

According to what has been said by Zetto as well as information shown during Episode 00, since TOME's virtual reality works by translating brainwaves into data, the Power does the opposite, tricking the brain into feeling pain. Anyone affected by it doesn't suffer any real life injuries, just pain (Zetto's arm only felt like it was cut off, but his arm still works as he's shown still using it as Kirbopher).

Zetto states that it was able to resurface through the use of Alpha's body. When it appears to Alpha, it states it wants to only "be free" and help him, but it truly wants to destroy every player in TOME, and uses Alpha's easily influenced mind and desperate need to impress his friends to achieve that goal. It appears to speak in a sound very similar to breathing, and is bent on taking apart TOME, one player at a time. The Forbidden Power can make a player near-invincible, at the cost of their mind being a network for its thoughts. When it awakens within a person's body, they gain a more serious, brutal personality, as well as intense amounts of strength. In Episode 5, Tigerlilly's sonic screech ability riles up the Forbidden Power, making it angrier. Afterwards it is shown to be noticeably more aggressive, at times awakening within a user and taking complete control of their character, causing their eyes to turn blood red, their teeth to sharpen, and them to adopt a darker color scheme on their character. It is at this point the player will be possessed by the Power, and will attack anything and everything relentlessly, their speech being nothing more than growls, screams, and the occasional "Kill...". A person may not change back to their normal form until they are beaten unconscious, or until coming into contact with the antivirus (as demonstrated with Flamegirl in Episode 7, who had the antivirus attached to her character).

According to Zetto, you can't just get rid of it. Rather, you have to lock it away within TOME itself, or within a host. Zetto attempts to get rid of it in Episode 10 using an early version of the antivirus installed into his left arm, only for it to break free and possess him instead. The last of the Power is seen when Nylocke stabs Zetto in the abdomen with his sword (Drain Edge attached), absorbing the Power into the Drain Edge, as he then proceeds to toss it as far as possible, believing that this'll be the last they see of the Forbidden Power. A post-credits scene shows the Drain Edge having landed on a statue in Sanctuary, glowing eerily.

In Episode 11, the Drain Edge is still stuck on the statue, having gone unnoticed for quite some time. It falls from its resting place to the ground when Gamecrazed's team is taken to HOME.

In Episode 12, Bishipp and ChaseAce stumble across the Drain Edge behind the statue. Before long, the Forbidden Power suddenly breaks out of the item, literally, and begins heading towards HOME. When ChaseAce informs Webmaster of this, not knowing what the Power actually is, Webmaster becomes very concerned and forcefully logs out Gamecrazed's team, stating that there is no way they can help, despite their experience with the Power. The Netkings then prepare to deal with the Power the next day. Zetto mentions to Kizuna that he thinks he knows what the Netkings are planning to do.

The Netkings attempt to seal the Power away again by using a program that simulates the effects SOFDTI had on the virus the first time around. This does not work, and it breaks out revealing its true, dragon-like form as Kajet. Kirbopher comes in to distract it, but is crushed within its grip and rendered unconscious before Alpha can come in riding on the Dragon Bug. The Dragon Bug engages in a deadlocked struggle with Kajet.

Eventually, Kajet and the Dragon Bug cancel each other out and turn into raw data. Rubirules then appears, containing both programs in crystals before heading down into TOME's core to secure SOFDTI. During the ensuing fight, Zetto grabs Kajet's crystal, causing him much pain before Alpha convinces him to give him the program. Zetto agrees and tosses it to Alpha. Alpha enters a state similar to the one he was in when he first discovered the Forbidden Power. He calls out to Kajet and asks it to fight, but Kajet speaks in a very hurt, accepting manner, ready to accept its own death if that is what must happen. Alpha converses with it, reminding it of what it is capable of and what it and Alpha were able to do together, throwing in a few good-natured taunts to rile it up a bit. Kajet agrees to trust him and the two bond together into a highly powerful form of Alpha. They do battle with Rubirules, who merges with the Antivirus to turn into a massive golem. Alpha and Kajet gain the upper hand, but they are seemingly weakened as Rubi transforms into a deformed copy of Alpha and fires the Dragon Bug from his arm. Alpha manages to defeat Rubi though, and upon his kissing Flamegirl, the virus and the antivirus cancel each other out Kajet says his last words before disappearing - "Such overwhelming power...Incredible."

Retrieved from "https://tome.fandom.com/wiki/Kajet?oldid=8781"
Community content is available under CC-BY-SA unless otherwise noted.