Kizuna (known as Tigerlily or The Karmic Blossom in the RPG adaption) is a major character in TOME. Kizuna was formerly Netking Number 7, who was responsible for bug-testing the game, but after the original incident with the Forbidden Power, she and her partner, Zetto, split off from the Netkings. She currently acts as the administrator of D-Buggers.org, using a powerful armored form called Tigerlilly as a disguise. She is an Animalistic character with the power of sharpshooting.

Kizuna has three different forms. Her standard form is humanoid, with long red-brown hair and a multipurpose pistol. In season 2 this form was redesigned to have a consistent red color to it. Her second "legal" form is a small red cat with a yellow collar. This ability is the reason her character is Animalistic, and not a Fighter. Kizuna uses this form to spy on players without being detected, usually the main cast. Her third form is a hacked version of her "Beast Armor" ability, named Tigerlilly. This form transforms her into a large mechanical orange beast with massive strength and a Sonic Screech, used to paralyze opponents and anger the Forbidden Power. Kizuna uses this form to fight opponents when her true identity must be kept a secret.

Kizuna has little character development over the series, but she is shown to be able to focus intently on one task without letting other things distract her. For example, her participation in the Gemini Tournament with Zetto was nothing more to her than a favor, since it was just part of the plan to get the Forbidden Power. This can lead her to be curt and narrow-minded at times, as she sees her goals as the most important at any moment in time. While she is patient, having to wait several weeks to let certain schemes play out, she gets frustrated easily when something goes awry. Losing the Forbidden Power has made her more irritable than before.

In Episode 00 (File: 00), it was revealed that Kizuna's personality used to be far more easygoing and lighthearted. However, when SOFDTI openly revealed her feelings for Zetto, she closed herself off and became irritable and frustrated, with her feelings only growing stronger after the incident with the Shadowguard Beast.

Episode 15 gives the audience the conclusion that Kizuna's closed and cold attitude stems from her desire to keep Zetto safe and her insecurity from having her secret feelings brought up, as she gets increasingly upset when she says that SOFDTI could very easily release another virus that could hurt Zetto or cause him to go crazy trying to get rid of it, showing a more emotional and paranoid side of her that wishes to protect the one she cares about.

Although Kizuna's first appearance as herself was in episode 8, her first technical appearance was in Mansion Midnight, as D-Buggers.org. This is her only "character" appearance until the Gemini Tournament begins. As D-Buggers.org, Kizuna gives the six hackers different jobs to work towards capturing the Forbidden Power. Her first appearance in her cat form is in episode 3, walking past The Platform while Saturndiva and Whyti are chatting with Flamegirl about Alpha.

Tigerlilly first appears in episode 5, appearing in ;Lavendera while the main cast are training for the Gemini Tournament. Using her Sonic Screech, Tigerlilly riles up the Forbidden Power inside of Alpha, which causes him to lose control. Demon Alpha then attacks Tigerlilly, defeating her.

Tigerlilly appears again in episode 6, after Gamecrazed and Nylocke have successfully reunited Hyprelynx and Elescope in ;Mechcity. Tigerlilly leaps from the Moon and attacks the party, nearly defeating them, but she is defeated by Gamecrazed when he uses the Drain Edge to absorb her attacks. It is unknown why Tigerlilly appears in this episode, but the most likely reason is that Kizuna was attempting to get the Drain Edge from Gamecrazed now that she and Zetto knew how powerful the Forbidden Power was.

In episode 8, Kizuna appears in human form for the first time, as Zetto's partner for the Gemini Tournament. She takes the whole tournament casually, easily defeating opponents and telling Zetto that the whole thing isn't a big deal for her. After taking out the Twin Blades, Kirbopher, and Alpha and Flamegirl, Kizuna and Zetto reach the final round against Gamecrazed and Nylocke. The battle is very close, with both sides virtually matched, but Nylocke and Gamecrazed forfeit in order to make a point about fun. Kizuna is seen at the trophy ceremony, holding her side of the trophy, with a frustrated look on her face.

Kizuna appears again at the end of Episode 12, once again in the Moon. Zetto arrives to tell her that the Netkings will be making their move the next day. When he asks her what to do, Kizuna tells him that she has to make some important calls.

The next time she appears is at the end of Episode 13, where she is giving instructions to Odboll.

In Episode 0, Kizuna appears with a different design that has aspects of both her season 1 design and season 2 design, with the color scheme the same as season 1, and hair more like her season 2 version. She has a staff instead of her handgun. She is seen messing around with Zetto, teasing him playfully. SOFDTI comments that they both have strong feelings for each other, causing Kizuna to have an outburst at her. She is there when Zetto fights against the Kajet, with Webmaster telling to to spot for bugs. She jokingly taunts Zetto, who sighs at this. She noticed when the Forbidden Power entered Kajet, trying to stop Zetto from fighting it.

Her next appearance is in Episode 14, where she starts off discussing with Zetto whether or not they can pull this off. She guarantees that this is their only chance to strike and whatever the Netkings are going to try will not work. She says that they are almost ready to launch, before heading down to make sure things run smoothly. She fights Alpha and Neomutant as Tigerlilly. She manages to defeat Neomutant, but Alpha breaks her armor and she flees in cat form. She drops down from the ceiling while Alpha and Flamegirl are talking, putting her handgun to Alpha's head. When Flamegirl begins turning purple, she is thinks it isn't supposed to happen, which Zetto affirms. She is surprised when Flamegirl is absorbed into the Dragon Bug, She watches as Zetto tries to shut it down, wondering what he is doing.

In Episode 15, Kizuna joins the group, remarking on how Dragon Bug and Kajet cancelled each other out. She helps in hunting down Rubirules. She is revealed to have known he was behind it all, like Zetto. She is the first to pursue him, asking Zetto if he's coming. The two of them make it down there, but she is removed from the picture after she turns into Tigerlilly, but the armor is broken by Rubirules. After his defeat by Alpha, she gets back up and attempts to kill SOFDTI. She says that SOFDTI will just read her mind again, and how she is a pest that needs to be destroyed. She says she is mad at her because she, due to creating Kajet, almost took Zetto away from her. She tries to get SOFDTI to say her feelings for Zetto, but Zetto shoots her in the back to protect SOFDTI. Shocked, she looks back at him, before she is defeated.

Kizuna also has the ability to change into a small cat, this is likely another hacked skill.

"A beta-tester for the game, who goes by the "Karmic Blossom". A highly-respected player in TOME. She has a wide array of powerful plant-based techniques."

Kizuna's inclusion, alongside Zetto's in the RPG adaption was open to question since the campaign's launch date. The duo were officially announced to be part of the RPG on December 28, 2019, in which they were revealed to be "Solo Entrants" of the Campaign of Champions with no relation to a particular guild or team and are one of the most difficult opponents that the players must face. Kizuna was officially renamed Tigerlily in homage to her disguised form, and received the most changes out of the two. Although still having the same Animalistic class as her previous counterparts, she became an anthropomorphic feline rather than a humanoid cat. Her attire also consisted of a red dress, arm brackets, gold and brown small top, bandages wrapped around her right arm and thighs, a tigerlily flower on the top of her head, a green scarf, a small bag next to her dress and white fur coated leg warmers. Whether or not the character will re-possess her previous incarnations' weapons remains yet to be revealed. 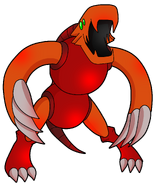 Retrieved from "https://tome.fandom.com/wiki/Kizuna/Tigerlily?oldid=9351"
Community content is available under CC-BY-SA unless otherwise noted.