Skeight is the alternate account created by Doubling in order to join Rockoon in TOME. Acting as a crazed fanboy, Skeight was an attempt by Doubling to informally apologize to Rockoon without having to show his face. Rockoon only accepted him as a partner because he couldn't find another one for the Gemini Tournament. He disposes of Skeight as soon as possible, using a "super move" to throw Skeight out of the arena. However, Skeight continues to follow him until Rockoon finally snaps and tells him to leave and that he never cared about him. Skeight reluctantly leaves, but not before revealing his true identity to Rockoon by calling him a "motherscratcher." Whether or not he will return to TOME is unknown.

Skeight speaks in a dialect imitation of Rockoon, attempting to get on his good side. Although he is an alternate account for Doubling, whether or not this account is hacked is unknown.

"Thinks very highly of himself and his skills. Wields a spike-studded yo-yo, can summon flaming tires and performs some wicked handstands."

In the RPG adaption, Skeight was given an updated appearance with a slim figure and headphone ears as well as mitten gloves. He still keeps his namesake by commuting with roller skates instead of a skateboard. His yo-yo also retained from the original web series. Skeight is shown to be partners with Rockoon and Archy as the three form "The Troublemakers" causing mischief in the game, and serve as opponents to the Dandy Alliance. Whether or not this incarnation of Skeight co-relates to the RPG incarnation of Doubling (as Skeight was Doubling's alter-ego in the web series) has yet to be confirmed. 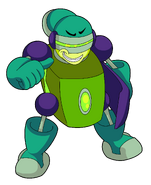 RPG Sprite
Add a photo to this gallery
Retrieved from "https://tome.fandom.com/wiki/Skeight?oldid=9313"
Community content is available under CC-BY-SA unless otherwise noted.