Terrain of Magical Expertise is a RPG video game adaptation developed by Neo-C Productions LLC and Chris Niosi, based on his well-known series of the same name. This adaptation bears an alternative timeline seperate from the TOME series and it's TV TOME Adventures incarnation with new designs and a new storyline.

The game consists of the player, who will play a nameless semi-customable White Hat Hacker character, joining alongside the Dandy Alliance to face off against new enemies and learn new techniques. The game is stylised and played similarly to Super Mario RPG, Paper Mario, and Mario & Luigi, where the players are given options and button pressing maneuvers to progress in the game.

Niosi is directing, writing and animating all of the character designs for the project. Niosi, Mike Luckas and Zack Frost are designing characters for the game. Luckas reworked the overall appearance of the Dandy Alliance with some tweaks from Niosi. Michael Scott Prinke is the head game developer and programmer of the project. Yoav Landau and Weston Durant return to the project as composers and sound designers. Blake Swift also returns to do sound design for the game and reprise his role as Alpha.

The game not only features reworks of the designs but also new additional characters and internet guest-spots of well known internet personalities such as The Game Theorists members, as well as Puddin' and Dumplin' created by Nick Landis, Grant Smith, and Kirran Somerlade from their Dragonball Xenoverse mods and even artificial monsters are shown in the game. Similar to the series, fans of the show also contribute with character designs to serve as background characters or fightable opponents in the game by backing through the Kickstarter. Based on the selective tier, participants are given a survey and an Assignment-of-Rights contract permitting the team to use the likeness of their characters as well as the ability to provide any necessary information or material for the character. Backers who donate to the highest tiers gain direct contact with Niosi in terms of design and their characters will be featured as important opponents in the game. There were many occasions where alternative contests have taken place which allowed fans whom either backed the original campaign or have not to be given an opportunity to be placed in the game regardless, most of which involved a contest of sorts.

The game is currently in production, with a free demo available ichi.io, and is set to release in the year 2020; which is the exact date that states the release of the MMORPG TOME within the web series.

According to creator Chris Niosi, the development of the game dated back since the original series' concept in 2004. Niosi initially wanted to develop a linear Flash grid-based RPG game based on his experiences role playing with his friends online, but his interest in animation led him to develop the story into a 76-episode series for Newgrounds entitled "TV Tome Adventures".

Around 2010, years after the conclusion of the original series, Niosi thought of developing an episodic based Flash platform game involving the player having the ability to switch characters and face on enemies from the series. Due to the lack of resources for a programmer, much like it's predecessor, it led to the development of the 2011-2014 web series.

During mid-production of the second series, a party-like board multiplayer game was taken in consideration in which four players would travel in a grid-based platform while facing several surprising enemies. The game would've taken place in-between the first and second season of the second series and Niosi has also began working on a serious game story for the concept. Due to dysfunctional issues between Niosi and the acquired programmer as well as the concept having both too much innovations and an ambitious but unique concept, development fell through as a result.

On 2016, during the release of the finale of the second series, the decision to make the game a turn-based RPG has been finalized. The initial concept was to have the show taken place in a fantasy setting with the main cast performing in-character until the ending reveals it to be a tabletop-esque roleplay from the start. However, under the influence of YouTuber James Rolfe's review on "Atari: Soulquest", the main story as well as the inclusion of the "Campaign of Champions" arc was developed instead. After acquiring a development team and raising a crowdfunding campaign, production for the final game officially began.[1]

Much like the original web series, there is a system all players must go through to create their characters. However, this system is a bit more "specific" than the one from the original. There are 3 subcategories one must go through; Race, Elemental Alignment, and Combat Class. 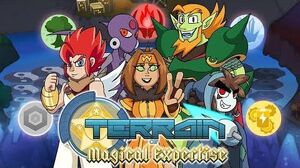 
Cite error: <ref> tags exist, but no <references/> tag was found
Retrieved from "https://tome.fandom.com/wiki/Terrain_of_Magical_Expertise_RPG?oldid=9499"
Community content is available under CC-BY-SA unless otherwise noted.